Andhra Pradesh’s  cuisine is probably the spiciest and hottest of all Indian cuisines. This region uses chillies and a lot of hot spices.

The cuisine is broadly classified into two categories – the more traditional original Andhra cuisine and the Hyderabadi cuisine which has Mughlai influences in it. The traditional food is the spicier one and is mostly vegetarian with the coastal areas having seafood delicacies in their regular diet. The Hyderabadi cuisine has the best of both the worlds. Among its non vegetarian delicacies are the chicken and lamb delicacies.

Rice is the staple food and is always accompanied with the spicy broth – sambar and curries made mainly with vegetables and spices. 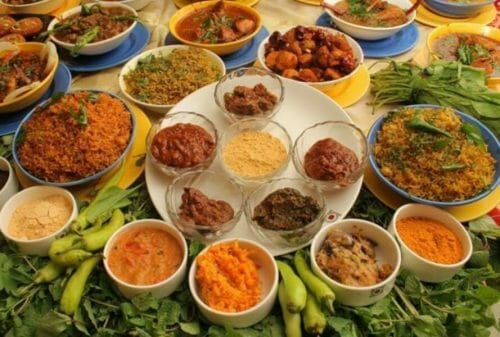 Like most South Indian cuisine, lunch is a very elaborate spicy affair for the people of Andhra Pradesh. Traditionally it is served in a banana leaf. Along with rice, a few spoons of ghee are served which acts as a coolant for the hot and spicy dishes. Along with sambar and vegetable curries, a wide variety of chutneys, dry and hot powders and pungent pickles are served as accompaniments for the main dish. Relishing Andhra’s food is indeed a very elaborate romance with the taste buds, so, let’s get started, mouth watering isn’t it?

Modati Mudda which means the first few bites of the meal mainly consists of four or few balls of rice. These are either ghee rice or pickled rice. Pickled rice are typically gooseberry, lime, aavakkayaa(mango) or grapefruit. It could also be rice mixed with certain powders (podi) like parupu podi, corriander podi, pudina podi, coconut podi, curry leaves podi and so on.

Famous snacks of the Telangana region are the Billavakka (snack prepared with rice flour and deep fried ), Sakinalu – a traditional snack usually prepared during Sankranti festival made of rice flour and sesame seeds.

Popular dishes from the Rayalaseema regions are the Alsandala vada, Ulavacharu, Peetala Kura, Brain fry, Liver fry and Prawn Iguru which can be combined with Sajja or Jonna rotis and Raagi sankati (a very healthy and nutritious food)  for an authentic feel of Rayalaseema food.

Hyderabadi cuisine is a very sumptuous part of the Andhra Pradesh food. The Mughal rule in Hyderabad brought this variety in the cuisine. Here, the slow cooking is the method followed. The most popular authentic dish of Hyderabad is the Biryani which is a rich-meat dish accompanied by mirch ka salan or Baghare baigan. This is also known as the jewel of Hyderabadi cooking. The Hyderabadi cuisine is a combination of Muslim techniques and meats cooked with the vibrant spices and ingredients. Hyderabadi cuisine tastes ranges from sour to the sweet, the hot and the salty and also has lots of dry fruits and nuts.

Some of the most delicious, mouth watering and authentic dishes from the cuisine of Hyderabad are the Dalcha, Chakna, Murgh ka korma, Dopiaza, Chugur gosht, Boti Kebab, Katti Dal, Khabuli, Bhuna gosht and many more. Haleem is one of the most authentic specialties cooked mainly during the Ramzan festival. It is a very high protein and nutritious dish.

This state is one of the spiciest in its cuisine. Tamarind, jaggery, chillis, spices all veggies, staple foods, and in the appropriate proportions – there you have almost all the dishes ready!

Awesome food of Andhra in that gongura pachadi is very tasty………….one of beutiful lunch in my opinion