1,208 views
Boneless chicken breast marinated with spices, grilled or fried in oil and cooked in a creamy tomato sauce
Jump to Recipe

Chicken Tikka Masala is a dish that originated in the Indian subcontinent. It consists of grilled chunks of chicken cooked in a tomato-based sauce.

The dish can be found in Indian restaurants the world over and is now often found on Western tables.

It has been claimed to have originated from Britain as an adaptation of a traditional Pakistani recipe called Kari Chicken which was brought to Britain by Pakistani immigrants in the 1960s and 1970s.

The British version was invented at the Shish Mahal restaurant in Glasgow, Scotland by a Punjabi chef named Ali Ahmed Aslam. It is believed that chicken tikka was created by accident one night, after too much tomato sauce at the restaurant and not enough lamb tikka to put on top of the chicken curry. 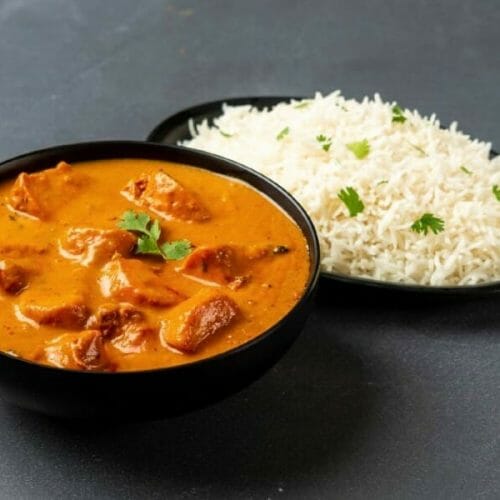 How to make Chicken Tikka Masala

If desired, instead of frying the chicken pieces, you can also grill them in an oven or tandoor.
previous post