Published under: HealthIdliSouth Indian
This is a  traditional prasadam offered in the Varadharaja Perumal Temple at Kancheepuram, spiced with pepper, cumin and dried ginger.
Jump to Recipe

Kancheepuram Idli is a well known variety of Idli from the silk town of Kanchipuram. Our Millet Kanchipuram Idli recipe uses millets instead of regular rice, hence, upping the health quotient.

Kacnhipuram Idli is very different in taste from the regular idli. Served as prasadam in the auspicious Varadaraja Perumal temple in Kanchipuram, the idli is traditionally made using mandharai leaves or banana leaves. Spiced with peppercorns, jeera and asafotida, this takes care of the digestion as they are slightly denser and heavier than the regular idli.

Substituting Millets (Varagu Arisi) for rice makes this Millet Kanchipuram Idli a healthier version. It is higher in whole grains, fibre and micro nutrients and best served with spicy tomato chutney or Idli podi. Any other chutney or sambar will also do.

If you don’t have the aforesaid leaves, you can use the regular idli plates or ever small sized tumblers as mould. An alternate way is to spread the batter on a plate and steam cook it, resembling the Dhokla. To get soft and fluffy batter, grind the Urad Dal and Varagu Arisi separately.

Let us know how it turned out & in the meantime, do enjoy the Millet Kanchipuram Idli for a hearty breakfast or dinner. Also check out some of our other Millet based recipes: Millet Adai, Thinai Idli, or Ragi Sweet Dosa. 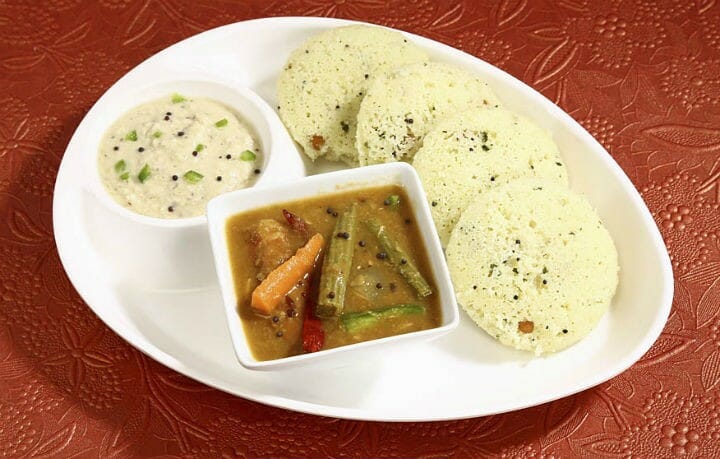 How to make Millet kanchipuram idli