708 views
The Paneer Pav Bhaji is a twist to this most commonly found chat recipes.
Jump to Recipe

Pav Bhaji is a quintessential street chaat item of Mumbai fame. Now, while people have their own favourites amongst the many chaat dishes, I’m yet to come across someone who has not taken a fancy to the Pav Bhaji. The Paneer Pav Bhaji is a twist to this most  commonly found chat recipes.

Just like our versatile Dosa, the simple Pav Bhaji has also, over time, undergone twists and turns through multiple experiments. The resultant output in the form of Jain Pav Bhaji, Corn Pav Bhaji, Paneer Pav Bhaji and Cheese Pav Bhaji. I have tried almost all of these variations except the Jain version. Also, amongst all these, I just can’t have enough of the Cheese and Paneer Pav Bhaji varieties. Personally, I just love Paneer and can zap it into almost any dish. Soft buns, slathered with Amul Butter(I’m very partial to this brand), served with spicy and smooth Bhaji with soft paneer topped with a small slab of butter once again – and I’m in food heaven! What are you waiting for, come join me and explore a simple, yet heartfelt that is the Paneer Pav Bhaji

For this recipe, you can add in the paneer which ever way you like – grated- if you like to smooth & mixed with the gravy overall, small or large chunks. What ever you do, just don’t forget to top it off with lots of butter and a squeeze of lemon. 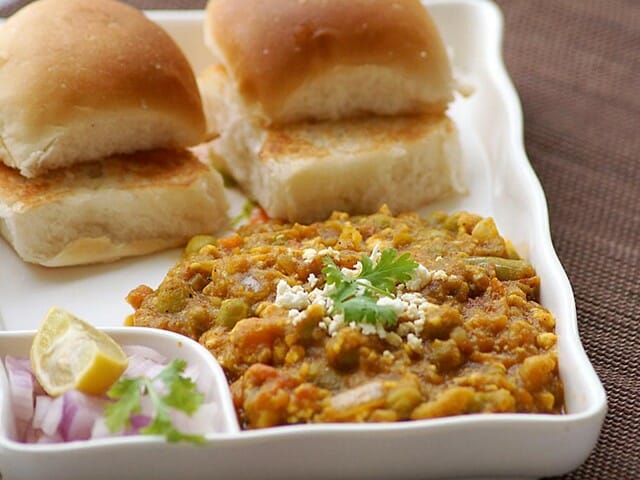 How to make Paneer Pav Bhaji