India is well-known as a “country of spices” since ancient times. However, the history of Garam Masala powder – a blend of different kinds of spices also dates back centuries ago when people realized that ground spices offer a better taste and texture to the food.

There are no clear citations of the historical facts about garam masala in any of ancient texts but the practice of mixing finely powdered spices is believed to be followed since the period of Islamic rulers.

The garam masala powder varies according to the region and personal taste preference. Initially, these spices were prepared by the women (especially grandmothers) of the house manually with the help of a vessel and a grinding instrument. However, with time, more machines were developed which were operated mechanically with some physical effort.

Today, advanced machines are used for grinding coarse spices into a fine powder so that all the ingredients get uniformly combined. However, people still prefer the homemade mixture of spices (masala) because it is fresh and adds a distinct flavor and aroma to their dishes. The factory made spice powders are usually of lackluster quality. They are normally added at the end to increase the spice quotient whereas homemade masala can be added anytime to enrich the flavor of the cooked food.

Sometimes people get confused with garam masala and curry masala. Garam masala is made only from whole spices whereas curry masala can have turmeric powder, red chili powder, and some other flavoring ingredients.

White/Black Pepper, cloves, cumin seeds, cardamom, nutmeg, coriander seeds, etc. are the commonly used spices while preparing garam masala powder. However, many other spices can also be added as per your requirement. In some parts of India, the powder is used in its dry powdered form whereas coconut milk and water is used to make a fresh garam masala paste in some regions. 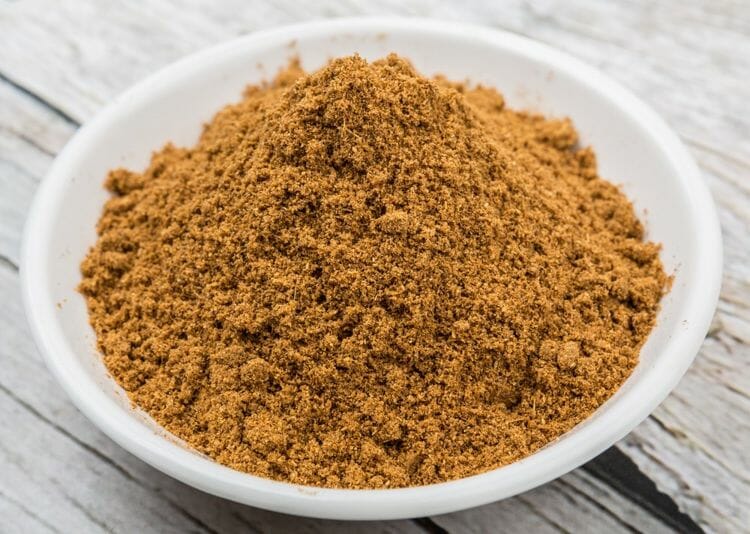 How to make Garam Masala Powder

You can make a larger quantity of this by using the above ingredients in the same ratio.