9.9k views
The sizzling Guntur Chicken recipe is a popular dish cooked in the Guntur district of Andhra Pradesh.
Jump to Recipe

The sizzling Guntur Chicken recipe is a popular dish cooked in the Guntur district of Andhra Pradesh. Usually, the dishes of Andhra Pradesh have a royal touch to them thanks to the Nizams and Mughals who ruled the region for centuries. However, this is a typical desi chicken dish which might have originated from the kitchens of local farmers who grew rice in their fields and had to pair it up with something delicious and spicy.

The chicken stew is prepared by adding freshly ground spices along with the tender chicken pieces. It gets a spicy hot flavor from the red chilies that are specially grown in the region.

Guntur chicken can be cooked either in curry style or the excess stew can be dried up to prepare dry masala chicken. Ingredients like coriander powder, cinnamon sticks, cardamom, cumin, and peppercorn are used for preparing the garam masala while whole spices such as bay leaves, cardamom, cloves, and cinnamon sticks are used to add spicy flavor to the dish.

The residents of Guntur and surrounding regions are habitual of eating hot cuisines that can release spicy fumes from your ears especially if you are a North Indian. Therefore, you can cut down the number of red chilies in the recipe or add a little bit of jaggery to give it a slightly sweet flavor.

Ginger garlic paste, turmeric, and red chili powder are used to marinate the chicken pieces at least a couple of hours in the refrigerator before cooking. You can also add fresh lemon juice to the marinate mixture if you like a tinge of sour lemony taste to your chicken.

Serve it on a banana leaf to devour this traditional cuisine in typical Andhra style! 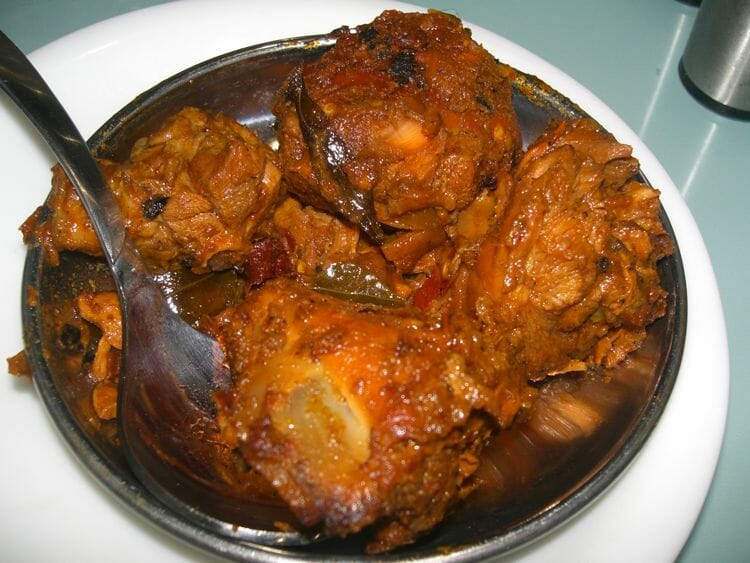 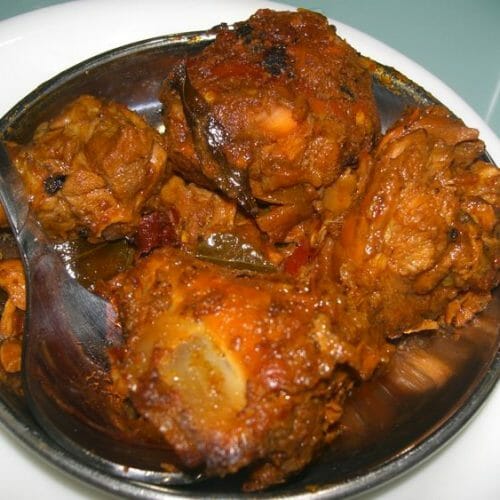 How to make Guntur Chicken

If you want the gravy to be dry, cook till all moisture has evaporated.

You have not mentioned what to do with Cardamom, Cinnamon & Clove powder. Are these to be dry roasted and ground together with other items mentioned or it is to be put in the oil before frying the onion.

Hi,
They need to dry roasted and ground together. Fixed this now. Thanks