In the event of a small emergency arising due to a
knife-cut or a burn in the kitchen, guess what an average Indian housewife will
do! Well, no prize for answering. She will find the closest and the safest
household remedy at hand – the ubiquitous Haldi (turmeric).

India has a rich history of using plants for medicinal
purposes. For many years awareness on turmeric and its use as medicine has been
continuously increasing. Turmeric has been used as a herb
and a spice in our country for thousands of years. This yellow rhizome became
the focus of world attention when an American pharmaceutical company moved to get
a patent on it.

At first sight, it looks like a field of ornamental plants –
a little wild and unkempt with fat yellow-green leaves but undoubtedly
beautiful. This is the turmeric plant, a native of South Asia. And, since time
immemorial, it has been grown in India. West Bengal, Tamil Nadu and Maharashtra
are its chief commercial producer states. 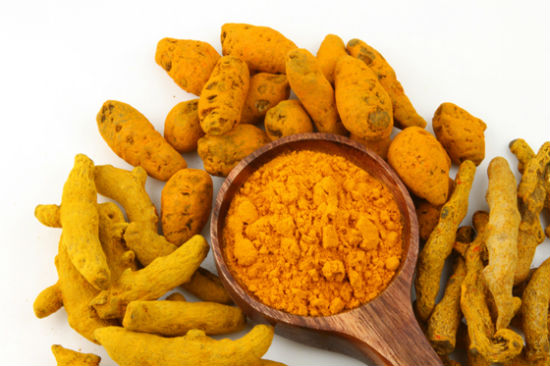 Turmeric, botanically called Curcuma longa, belongs
to the plant family Zingiberaceae. It is known
by many names in India – harirda, Nisha and kanchani in
Sanskrit and haldi in Hindi and Urdu. I fact, the
word turmeric comes from the Latin terra merita which
means ‘merits of the Earth.’

The turmeric plant grows up to a height of 3-4 ft and has a short and stout stem. Its leaves resemble
newborn banana leaves and are up to 2 ft long and
about 6 inches wide. They emit a mango-like fragrance. Its flowers are yellow.
The roots or underground rhizomes are fleshy, thick and hard. The roots are
ready for market when they are cleaned and boiled for a period of 30 minutes to
six hours, according to its different varieties. Then these roots are dried and
sold in the market. On grinding, they yield a yellow powder having a strong
aromatic odour and a pungent taste.

Its mineral and vitamin contents include calcium, iron,
phosphorus, thiamine, niacin and carotene. Its calorific value is 349. Chemically,
turmeric contains an active constituent called curcumine which is an essential
oil. It has been shown to have a wide range of therapeutic effects. It is a
known antibacterial, anti-allergic, carminative, diuretic and anti-oxidant in
nature.

The antioxidant property of curcumine protects us from
cancer and atherosclerosis (clogging of the arteries).

A recent study conducted at the Life Science Department,
Mumbai University, has found that turmeric in its alcoholic extract has hypolipidemic effects. Biochemists have extensively studied
the unique combination of its properties like its anti-oxidant, hepatoprotective and potential anticancer effects. There
also seems to be reasoned speculation that it holds promise against HIV.

While studying the effects of turmeric on people suffering
from submucus fibrosis it was seen that the serum
total cholesterol levels of these cases were decreased. Turmeric extract may
prevent gall stone formations and incidence of colon cancer. Some of the
currently used allopathic drugs, apart from their innumerable side effects, are
also very expensive. The drugs prepared from turmeric may be cheap and with
minimum side effects.

Turmeric is not just a yellow ingredient used in cooking; it
is a medicinal plant with countless therapeutic benefits. In Malaysia, turmeric
paste is spread on the mother’s abdomen and umbilical cord after delivery for
its antiseptic properties. In Himachal Pradesh, fresh roots of turmeric are
used as a vegetable to help people traverse the difficult hilly routes. A
particular region of Japan where turmeric tea has been consumed traditionally
and regularly is also coincidentally the place where the highest numbers of
centurions live.

Ayurveda credits turmeric with aiding digestion, fighting
infections, treating liver and stomach problems and inflammatory disease
including arthritis and ulcers and other conditions such a aches, pains, wounds and sprains. Turmeric also reduces heartburn, and is used
as a topical ointment for healing wounds and eczema.

A study showed that turmeric has beneficial effects in
patients of allergy, asthma, respiratory problems, heart disease, Alzheimer’s disease, neuro-degenerative diseases, diabetes and cancer. It
can modulate the immune system and is known to have anti-viral and antifungal activity.

Curcumin has been shown to inhibit
or stop the formation of many different types of cancers in animals exposed to
known carcinogens.

According to researchers at the National Institute of
Nutrition (NIN), Hyderabad, a teaspoonful of turmeric a day can keep cancers at
bay. Dr Kamala Krishnaswamy and her colleagues at the
NIN have found that it can also decrease the presence of cancer-inducing elements,
or mutagens, in humans.

Scientists from the Institute of Cytology and Preventive
Oncology (ICPO), Noida, have found that curcumine protects the human body from
the deadly human papilloma virus, the main cause of cervical cancer. Speaking
to the press recently, ICPO director Dr B. C. Das said, “Curcumine was known to
have anti-cancer properties. But nobody knew exactly what type of cancer it could
cure, how it could cure and where it acted. For the first time, we have shown
how this compound can treat cervical cancer.”

And researchers from the Rutgers’ University’s Ernest Mario
School of Pharmacy, New Jersey, USA, have found that curry spice turmeric holds
good potential for the treatment and prevention of prostate cancer, particularly when combined with certain
vegetables. They noted that in contrast to the high incidence of prostate
cancer in the USA, the incidence of this disease is very low in India. This is
because of the dietary consumption of large amounts of turmeric in our food.

Turmeric is very effective in the treatment of skin disease
and a good promoter of complexion. The modern cosmetic industry depends heavily
on turmeric. Its paste should be applied to the face and other parts of the body
by mixing it with milk, cream or sandalwood paste. If you have ringworm or
scabies, apply the juice of raw turmeric externally to the affected area. For
speedy recovery, simultaneously take turmeric juice mixed with honey orally.

A totally new facet that has emerged in the past few years
is turmeric’s ability to fight malaria. Researchers at the Indian Institute of Science,
Bengaluru, have found that curcumine kills malaria parasites. On the basis of
its finding, the team led by biochemist Dr G. Padmanabham,
has proposed to the World Health Organization a novel artemisinincurcumine therapy to treat malaria.

The scientists have been granted a US patent for the invention
which could potentially bring down the cost of treating malaria, especially the
resistant variety. Malaria infects about 2.5 million people in India every
year, and it is increasingly becoming resistant to commonly used drugs.

Turmeric prevents the accumulation of amyloidal proteins which
lead to plaque formation and initiate disease. It may also reduce the size of a
hemorrhagic (bleeding in the brain caused by ruptured vessels) stroke.
According to a recent study, reported in the Journal of Clinical
Biochemistry and Nutrition, curcumine is also effective against the harmful
impact of arsenic, a poison that can be fatal to humans.

Used both externally and internally, some of the common household
prescriptions of turmeric include:

Ethnologically, turmeric occupies an important position in
our life. It is a good and inexpensive substitute for saffron. It forms an
integral part of our cuisine, ceremonies and rituals. There is an important
function of applying turmeric paste onto both the bride and the groom in the
Indian marriage extravaganza. Since the spice is easily available, buying in small
amounts is recommended to enhance its medicinal effectiveness and even taste.
So, are you a diehard fan of that aloo-gobi subzi made with lots of turmeric? Go, savor it! You
will, no doubt, be safe from a lot of diseases.