They are juicy and the mere mention of the name brings water in your mouth. Strawberries which were once very rare to find are now available in all parts of the world. The name Strawberry was derived from the berries that are “strewn” about on the plants, and “strewn berry” eventually became “Strawberry”. They are from the Rosaceae family, and are of the Fragaria genus. They are not berries or fruit at all, but enlarged ends of the plant’s stamen. Strawberry seeds are on the outer skin, instead of in the inner berry. They have been used for sunburn, discolored teeth, digestion, and gout. As far back as the 13th century,the Strawberry was used as an anaphrodisiac. 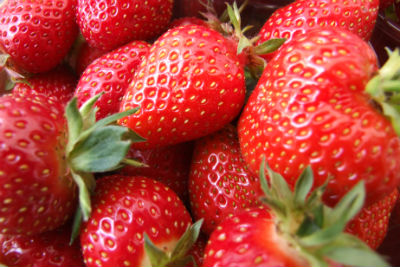 Strawberries were served at medieval state events. They symbolized prosperity, peace, and perfection. The most famous public eating of strawberries is at Wimbledon each year, when strawberries and cream are consumed between tennis matches by properly attired English. It is also known that Russian empresses also loved them.

American Indians allegedly invented Strawberry shortcake, mashing berries in meal to make bread the colonists enjoyed–but they must have used wild strawberries since strawberries have been cultivated in America only since 1835. The Hoveg variety was imported into Massachusetts from France in 1834 The Fraser clan in Scotland derived its name from French immigrants named Strawberry (Fraise) who came with William the Conqueror in 1066.There are references to the strawberry as far back as ancient Rome.

Strawberries are native to North America, and the Indians used them in many dishes. The first colonists in America shipped the native larger strawberry plants back to Europe as early as 1600. Another variety was also discovered in Central and South America, which the conquistadors called futilla. Early Americans did not bother cultivating strawberries, because they were abundant in the wilds.

Cultivation began in earnest in the early part of the 19th century, when strawberries with cream quickly became considered a luxurious dessert. New York became a strawberry hub with the advent of the railroad, shipping the crop in refrigerated railroad cars. Production spread to Arkansas, Louisiana, Florida and Tennessee. Now 75 percent of the North American crop is grown in California, and many areas have Strawberry Festivals, with the first one dating back to 1850.

The strawberry is often described as a luxury item, enjoyed by royalty. France’s King Charles V had over 3000 planted at the Louvre in Paris, King Louis XIII ate them everyday; and both Louis XIII and Louis XIV the latter enjoyed the berries so much that they are recorded to have eaten them to the point of indigestion!

The use of strawberries and of the strawberry plant itself for therapeutic purposes dates back as long as they have been eaten. American Indians prepared infusions of strawberry plant leaves as a treatment for stomach pain and gastrointestinal ailments such as diarrhoea. Swedish botanist Carl Linnaeus was convinced that strawberries had miraculously healed his severe attack of gout; and the French philosopher Bernard de Fontenelle, who died at the age of 100 attributed the secret of his longevity to strawberries.

Cancer Prevention
Ellagic acid is present in many red fruits and berries, including raspberries, strawberries, blackberries and cranberries. Studies have shown that strawberry consumption can increase anti-cancer activity on cancer cells of the breast, oesophagus, skin, colon, prostate and pancreas. Strawberries have also been shown to significantly reduce liver cancer cells.

Alzheimer’s disease Prevention
In addition to their known beneficial effects on cancer and heart disease, the antioxidant qualities of strawberries may also be beneficial in reversing the course of neuronal and behavioural aging. Due to their positive effects against anti-neurodegenerative diseases, strawberries are helpful in slowing the onset and reduce the effects of Alzheimer’s disease.

Cardiovascular Health
Strawberries have also been linked with effecting blood vessels, platelets and lipoproteins positively, which can reduce the risk of coronary heart diseases.

Anti Inflammatory
Strawberry extracts have also been shown to inhibit COX enzymes in vitro, which inhibits the inflammatory process.

Glycemic Index (GI) of Strawberries
In a study to determine the estimated GI of various foods, it was concluded that strawberries have a low GI of 40.