Spices are the key ingredients to Indian cuisines especially when we talk about curries and side dish recipes. It is important to know about the main and optional spices used in your favorite dishes as you might be missing an essential ingredient. Also, these ingredients could prove to be a hidden secret for your recipes.

Finely powdered dried spices should be stored in airtight containers. Substitute your old spices with fresh ones regularly as they tend to fade over time. You can also inhale the aroma of the spices to find out whether they are stale or foul-smelling. 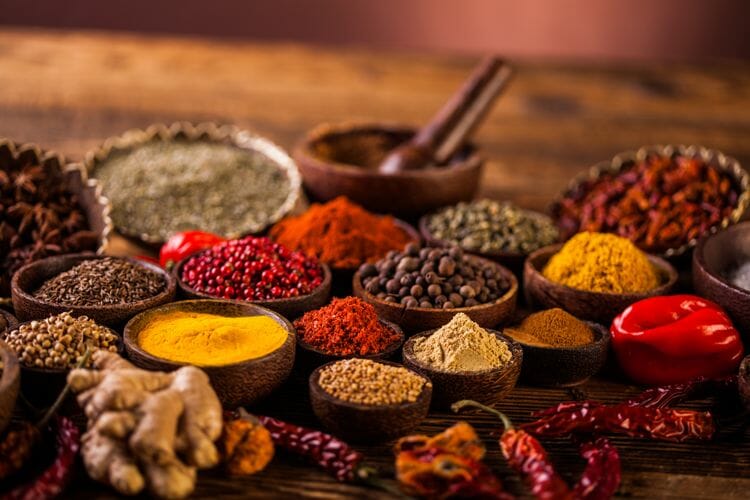 There are 12 main spices found in nearly all the Indian curries:

Cumin powder is made from ground cumin seeds and is the primary ingredient that gives a unique aroma to the curries.

Garlic has a strong pungent aroma and fresh garlic should be used wherever possible.

Though root ginger is not as strong and lingering as garlic, it complements the curries by giving them a slightly sweeter aroma. Here also, fresh, peeled and grated ginger it the best for cooking.

Chilli peppers (strictly speaking it should be spelled as ‘chile’) are present even in the mildest of curries. There are many varieties each with differing levels of heat. Apart from the heat, chilies also add a lot to the flavor to a dish and the flavours vary from type to type.

The seed of the cumin plant (Cuminum cyminum) is a small sesame-sized seed. The whole or powdered form of cumin seeds can be used. The dark earthy brown powdered form is an essential ingredient of Indian curries. It has a mild peppery taste and a strong aroma.

Garlic bulbs usually comprise around 6-10 cloves. These cloves can be separated by squashing the bulb against a hard surface. Discard the dry flaky white skin, chop the bottom of the cloves and peel them before crushing.

Whole garlic can be used or you can also slice, dice or crush them before adding them to a particular recipe. The best way to crush a garlic clove is to smash it hard against the flat side of a heavy knife and chop into small pieces. It is said to have many medicinal uses, such as reducing cholesterol and thinning the blood. The disadvantage is that it leaves you with a foul breath!

Ginger grows in tropical, sub-tropical and warm climates. This knobbly root can be peeled and grated into curries. While grating the flesh, you typically end up with a stringy lump of ginger which yields ginger juice when squeezed. Fresh ginger is mostly moist in nature. It is popular in all Asian cuisines and is also used to flavor beer (Ginger beer) and bread (Gingerbread).

Chilies are infact a berry fruit and their heat levels are measured as per Scoville scale that was invented by scientist Wilbur Scoville in 1912. The hottest chili commonly available is the Habanero pepper (sometimes called scotch bonnets) which scores up to 350,000 Scoville heat units. However, a recently discovered Indian chili called the Tezpur has a score of 855,000 SHU.

The chemical in chili peppers which sets your mouth on fire is called capsaicin. This chemical results in the release of neurotransmitters that make your nerve endings to think that they are burning. The brain releases endorphins to soothe the pain and this creates the chili addiction so many of us have.

One of the most popular chilies is Jalapeno. This green Mexican chili scores only 5000 on the Scoville scale but packs a powerful spice punch for most people and has a great flavor as well.

The most common chili used in Indian cooking is the Cayenne chili, a thin green chili 1 to 2 inches in length. It scores 50,000 on the Scoville scale.

Shreds of evidence in historical documents reveal that chilies have been part of the human diet since 7000 BC.

Most chili powders are not made from pure dried chili as they usually contain other herbs, spices and salt as well. These powders are fine but can unwittingly add essences which you had not intended. For a pure chili powder, use cayenne pepper or buy dried chilies and crush them into a powder with a pestle and mortar.

The leaves and the seeds of the coriander plant are used in Indian cuisines. The whole, crushed or powdered form of these seeds can be used.

The dark earthy brown powdered form is used in most of the Indian curries. The fresh green leaves have a strong citrusy aroma. The leaves can be directly picked from the plant and are used for garnishing or to add a peculiar flavor to various curry based dishes.

Turmeric powder is made from the ground root of the plant. It has a vibrant yellow color and is used predominantly for adding color to the dishes. Turmeric has a mild flavor but it gives a slightly bitter earthy aroma to the dishes. Therefore, too much turmeric can cause a dish to taste musty and unpleasant.

Cinnamon comes from the dried bark of the cinnamon tree. It is mostly used in a powdered form but dried bark pieces can also be used directly. This spice is sparingly used in some curries especially when it comes to sweet and mild tasting curries.

Cloves come from the dried flower bud of the clove tree and are mostly used in their whole form. This spice is sparingly used in some curries for adding a tinge of contrasting flavors. It is often used in sweet dishes as well.

Green cardamom pods come from the cardamom tree. They are strongly flavored and sweetly spiced. With a slightly soapy taste (don’t let that put you off), the whole pods can be added to stews, curries and rice dishes. You can also remove the seeds and crush them into a powder for adding in different recipes.

Black Pepper seeds are the dried berries of the pepper tree (Piper nigrum). Initially, black pepper was used to increase the spice quotient of the Indian dishes when Chilli was not yet introduced in the Indian cuisines. It is not related to the chili pepper or green peppers at all as they were named after it by Columbus. Black Pepper can be used in its whole, crushed or ground form in any dish.

Salt has been overlooked from the beginning by the curry chefs. Some of them believe that with all those other spices why would I need salt? However, salt is a crucial ingredient used to increase the flavor of any curry. Add it sparingly, stir in and taste. Instead of using plain salt you can also use soy sauce which has a high salt content.