Home Food Blogs All about Saffron

The English word saffron comes from Latin safranum, via the 12thcentury old French term safran. Another theory states that safranum derives from the Arabic word, az zafaran, literally, the adjective asfar, meaning yellow. It is called kesar or zaafran in Hindi and Urdu; kungumapu in Tamil; kumkuma puvva in Telugu; zaafran in Persian; zanghonghua in Chinese; safran in German; zafferano in Italian and azafran in Spanish. 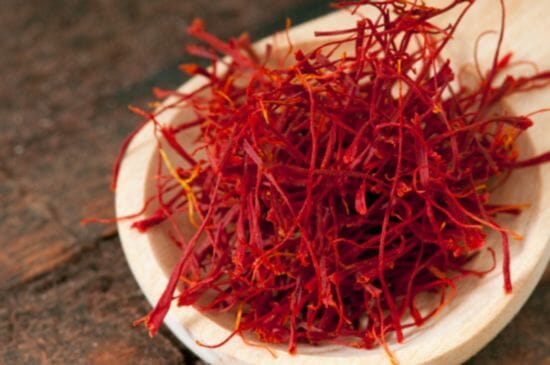 Origins: Saffron-based pigments have been found in 50,000-year-old depictions of prehistoric places in north-west Iran. Later, the Sumerians used wild-growing saffron in their remedies and magical potions. Saffron was an article of long distance trade before the Minoan palace culture’s 2nd millennium BC peak. Ancient Persians cultivated saffron in their regions of Derbena, Isfahan and Khorasan by the 10th century BC. At such sites, saffron threads were woven into textiles, ritually offered to divinities and used in dyes, perfumes, medicines and body baths. Saffron threads were scattered across beds on the wedding night of the newly-wed, who were also offered saffron powder in hot milk as an aphrodisiac.

It was also used as a drugging agent and mixed into hot teas as a curative for bouts of melancholy.

During his Asian campaigns, Alexander the Great used Persian saffron in his infusions as a curative for battle wounds. His troops imitated the practice from the Persians and brought saffron-bathing to Greece. In late Hellenistic Egypt, Cleopatra used saffron in her baths so that lovemaking could be more pleasurable.

Ancient Persian records date its arrival to sometime before 500 BC, attributing it to either Persian transplantation of saffron corms to stock new gardens and parks, or to a Persian invasion and colonization of Kashmir. Tamils have been using saffron for more than 2,000 years. Some historians believe that saffron came to China with the Mongol invaders from Persia. On the other hand, saffron is mentioned in ancient Chinese medical texts, including the 40-volume Shennong Bencaojing (ShennongÊ¼s Great Herbal), dating from 200-300 BC.

Europeans brought saffron to the Americas when immigrant members of the Schwenkfelder Church left Europe with a trunk containing saffron corms. By 1730, the Pennsylvania Dutch cultivated saffron throughout eastern Pennsylvania. Spanish colonies in the Caribbean bought large amounts of this new American saffron and high demand ensured that saffron list price on the Philadelphia commodities exchange was set equal to that of gold.

Cultivation: After aestivating in spring, the plant sends up five to 11 narrow and nearly vertical green leaves, each up to 40 cm in length. In autumn, purple buds appear. Only in October, after most other flowering plants have released their seeds, the brilliantly hued flowers develop; ranging from a light pastel shade of lilac to a darker and more striated mauve. Upon flowering, plants average less than 30 cm in height. A three-pronged style emerges from each flower; each prong terminates with a vivid crimson stigma, reaching 3 cm in length.

It can nonetheless survive cold winters by tolerating frosts as low as — 10oC and short periods of snow cover. Irrigation is required if not grown in moist environments such as Kashmir, where annual rainfall averages 1,000-1,500 mm. Saffron growing regions in Greece have 500 mm, annually and Spain has 400 mm, far drier compared to the one cultivated in Iran.

Greek, Moroccan and Spanish growers have devised distinct depths and spacing’s to suit their locales.

After a period of dormancy through the summer, the corms send up their narrow leaves and begin to bud in early autumn and bloom only in mid-autumn. Harvests are by necessity a speedy affair after blossoming at dawn; flowers quickly wilt as the day passes. All plants bloom within one or two weeks.

Graders measure absorbance light by dry saffron samples. Higher absorbance’s imply greater crocin concentration and create a greater colourative intensity. These data are measured through spectrophotometry reports at certified testing laboratories worldwide. The colour grades proceed from absorbance lower than 80 (for all category IV saffron) up to 190 or greater (for category I).

The world’s finest samples (the most selected red-maroon tips of stigmas picked from the finest flowers) receive absorbance scores in excess of 250. Market prices for saffron types follow directly from these ISO scores. However, many growers, traders, and consumers reject such lab test numbers. They prefer a more holistic method of sampling batches of thread for taste, aroma, pliability and other traits in a fashion similar to that practised by tasters. Italian varieties are slightly more potent than Spanish, while the most intense varieties tend to be Iranian in origin. Westerners may face significant obstacles in obtaining saffron from India, as India has banned the export of high-grade saffron abroad.

Aside from these, various boutique crops are available from New Zealand, France, Switzerland, England, United States and other countries. In the USA, saffron prices range from US$1,100-11,000 per kilogram.

The price in Canada recently rose to Canadian $18,000 per kilogram and in Western countries; the average retail price is £1,100 per kilogram.

Uses and medications: Saffron aroma is often described by connoisseurs as reminiscent of metallic honey with grassy or hay-like notes, while its taste has also been noted as hay-like and sweet; it contributes a luminous yellow-orange colour to foods. It is widely used in lots of South Asian, Middle-Eastern and European cuisines. Other products are hot and cold beverages, shacks, ice-creams, puddings, custard and other desserts, soups, sauces, biscuits, cakes and confectionery. Its proportion in all preparations is frugal, consequent to its expensiveness.

Saffron has also been used as a fabric dye and in perfumery, particularly in China and India. Besides, it is used as an insecticide or pesticide. Saffron has the characteristic of healing wounds. Modern medicine has discovered saffron as an active anti-mutagenic, immune modulator, anti-depressant, antioxidant and sex-stimulant. It helps in ailments like indigestion, high blood pressure, menopausal problems, gastro intestine and scabies.

Early studies show that saffron protects the eyes from the direct effects of bright light and retinal stress apart from slowing down macular degeneration. A research study revealed that saffron inhibits carcinogenesis, and is now being studied as the most effective cancer chemo-preventive agent.

Culture: Deep saffron is the colour of the upper band of the Indian National Flag, representing courage, sacrifice, patriotism and renunciation. Kesar is also referred for lions, as the standard complexion of lions is saffron.

In Sanatan Dharma, the colour deep saffron is associated with sacrifice and salvation. Saffron or bhagwa is often worn by sanyasis who have left their homes in search of the ultimate truth. Buddhist monks in the Theravada tradition typically wear saffron robes, although, occasionally, maroon is worn by Vajrayana Buddhist monks. Sikhs use saffron as the background colour of the Nishan Sahib, the flag of the Sikh religion, upon which the khanda is displayed in blue.