For many of us housewives, the last job in the kitchen at night is to warm a bowl of milk, add a teaspoon of curd to it, and cover it with a plate.
And – hey presto! – The next morning, there is a large bowl of fresh, appetizing, creamy, healthy curd.

Variations or additions to it can yield diverse tastes – thickening the milk and mixing some sugar to it before adding the ‘starter-curd’ produces Mishti Doi, the coveted Bengali sweet. Draining out the water in the yogurt produces chaak, which with the addition of powdered sugar and different flavours gives us shrikhand, which is a great favourite amongst Maharashtrians.

Of course, one can eat it plain too or convert it to raita, kadhi or as a sweet ending to a meal. If you wish to add a style element to it, layer it with fruits or fruit-pulp in a crystal glass, and spoon it up in delicious mouthfuls. It also makes for a filling and nourishing breakfast – just by adding handfuls of cornflakes or puffed rice along with nuts, raisins, cut fruit and honey. On hot days, nothing is as refreshing as a tall glass of frosted ice-cold lassi – many a Punjabi dhaba is well-known for their styles of lassi, served in huge Patiala glasses. You can jazz up party food with a minty curd dip set in a basket of crisp wafers. And if you want more uses just add a tablespoon of it to gravies to impart a tangy flavour, and a warm, golden colour. 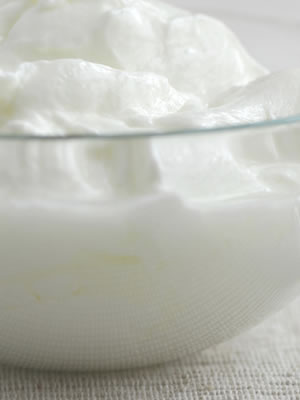 Dahi or curd (or yogurt as the West calls it) is not just wholesome, it is also very versatile, and has always been an essential part of the Indian diet. Yogurt is a fermented dairy product made by adding bacterial cultures to milk, which transforms the milk’s sugar, lactose, into lactic acid. This process gives yogurt its refreshingly tart flavour and unique pudding-like texture, a quality that is reflected in its Turkish name, yoghurmak, which means ‘to thicken’.

History of Yogurt: While it is unclear when and where yogurt was developed, fermented dairy products have probably been consumed for thousands of years, ever since cows were domesticated. One of the first records of yogurt consumption comes from the Middle East during the times of Genghis Khan in the 13th century, whose armies were sustained by this healthful food. Yogurt has long been a staple in the diets of the Middle East, Asia, Russia and Eastern European countries, such as Bulgaria. The longevity of peoples of certain cultures, such as the Bulgarians, was related to their high consumption of yogurt. Apparently brought to Turkey by the Mongols centuries ago, yogurt today plays an important role in many different world cuisines.

Nutrition Values of Yogurt: Yogurt is a very good source of protein, carbo hydrates, vitamins B2 and B12, minerals such as iodine, calcium, sodium, potassium, phosphorous and zinc. It is a good source of molybdenum and pantothenic acid, and has a full array of nutrients, including sugar, soluble and insoluble fibre, fatty acids, amino acids and more. Lactose in milk is converted by yogurt’s bacteria into lactic acid which helps digest lactose or other dairy products. Besides, the lactic acid of yogurt is the perfect medium to maximize the absorption of calcium.

High in calcium, yogurt is beneficial for bone and teeth health and for those seeking to prevent bone density loss and osteoporosis. It is a good source of protein, which is an essential building block for many systems in the body, including muscles. Protein is also good for curbing appetite and helping you feel full for a longer period of time.

Yogurt is much easier to digest than milk and easier on the stomach for those who are lactose intolerant, and cannot consume dairy products. Yogurt is simply milk cultured with active live cultures, which are the key to many of yogurt’s health benefits. Active live cultures are basically good bacteria that promote digestive health and boost the immune system. Good bacteria can also prevent various types of yeast and urinary tract infections. If you are taking antibiotics, they may be destroying the good bacteria present in your body. Eating yogurt regularly can help restore good bacteria levels.

According to researchers, yogurt may significantly reduce the risk of colorectal cancer, since it contains a number of potentially cancer preventive factors, including a protective fat called conjugated linoleic acid (CLA), which has also been shown to be cardio-protective.

Eating yogurt regularly ensures an intake of sufficient quantities of magnesium, potassium and calcium, three key ingredients which help to reduce hypertension. Studies have shown that a calcium-rich diet also helps regulate blood pressure in women during and after pregnancy.

Yogurt not only lowers levels of hydrogen sulphide and other volatile sulphide compounds responsible for bad breath, but may also eliminate tongue-coating bacteria and reduce dental plaque formation, cavities, and the risk for gingivitis. It also increases immunity in many individuals. And all these health benefits can be had while enjoying a tasty dish made with this wonder food, which can be made so easily at home every day.