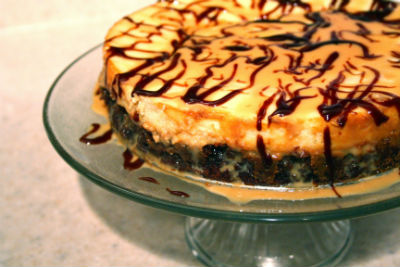 First, make the brownies. You can always use a store-bought brownie mix or even brownies from a bakery, but this is an easy way to make them using ingredients you probably have on hand.

Put all ingredients into a bowl and mix with an electric mixer for about four minutes. Pour into a greased 8×8-inch pan. Bake at 350 F for 30 minutes.

Once the brownies are done, let them cool completely, and crumble into tiny bits. Set aside.

Next, make the crust. Start by finely chopping two cups of pecans. You can use a food processor to make this step quite simple. Mix 2 cups flour, ½ pound of cold, unsalted butter (2 sticks) and a dash of salt. Mix until it looks like cornmeal, then add the chopped pecans. Press the mixture up the sides and in the bottom of a 10-inch springform pan. Bake for about 10 minutes at 450 F or until golden.

Here are the ingredients you’ll need for the cheesecake layer:

If you’re in the mood for something sinfully sweet, make this rich, velvety brownie caramel cheesecake. It’s a lot of work, so plan ahead if you’re making it for a special event. But it’s well worth the effort, because it’s sure to be a hit at any gathering!