Mexico has a host of flavours to offer to the gastronomist looking for a mouth-watering romp across its exciting landscape. The flavours have developed and reach its culminations point through centuries of interaction between radically different cultures. The article attempts to provide insights into the prominent flavours that contribute to gourmet Mexican dishes.

They constitute the flavours that you are likely to encounter most commonly in the Mexican food. The garlic can be obtained in fresh form within a jar or in powdered mode and is frequently used in an entire array of recipes. The prominent recipes that have a rich presence of garlic and lusciously appealing are Spanish rice, Salsa, and taco seasoning. Onion comes next and is obtained in either fresh form or in powdered mode. Onion enhances the taste of recipes in conjunction with the garlic.

The other common flavours that come next are chilli powder, cumin and oregano. They lend Mexican recipes an inviting and earthy flavour that makes them highly appetizing. Oregano comes in other types too like Mediterranean. This version has its presence in Italian cuisine too. Oregano teams perfectly with dishes that are tomato based and lend an exciting and delectable flavour to different recipes. Cumin has made its presence felt literally since the start of history. Cumin’s origin can be traced to the pristine land in the Mediterranean; however it has gained popularity across the globe due to the relative ease with which it can be grown anywhere through the world. The bitter yet toasty taste of the cumin lends Mexican recipes an irreplaceable flavour that is unique in every sense.

Chilli powder is prepared by commingling dried and powdered chillies, oregano and cumin. The mix may occasionally feature sprinkling of other spices too, but the aforesaid are the prime ingredients. Chilli powder finds it use in the preparation of a number of recipes; however the primary use is for seasoning of the vegetables and meat. Ancho chilli powder constitutes another beautiful Mexican flavour. This powder is nearly sweet and possesses of rich dried flavours of various fruits. Chipotle is another chilli powder that also finds common use and is also soaring in popularity outside of Mexico. It is a form of jalapeno which has been dried and smoked. The distinctive flavour of chipotle raises the food value of numerous Mexican salsas and sauces. Adobo, a well-known marinade also is primarily prepared out of this.

Epatoze is another of the spices that has not gained wide popularity commensurate with its contemporaries. It is primarily used for flavouring of beans. Epatoze has the known medicinal value of setting right any sort of intestinal discomfort set in due to consumption of beans. It is also known as the ‘Mexican tea’. The sharp and strong taste mandates that it should be used sparingly in recipes. When used in larger quantities, it may turn out to be poisonous.

Anise, cloves and cinnamon also uniquely garnish Mexican dishes with their distinctive flavours. Cocoa is applied to several recipes to lend a highly rich and warm flavour. Spices in combination with meagre amounts of cocoa and peanut butter are used for the preparation of Mole, a thick sauce which is used for serving over chicken. Raisins are also used for flavouring of variety of dishes. 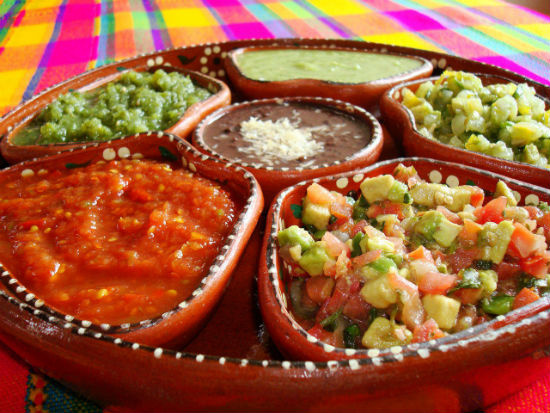 The combination of various flavours can be used for seasoning of vegetables and meat. Such flavours make the Mexican cuisine so appealing, luscious and appetizing. The authentic recipes rely heavily on the richness of flavours. Such flavours have shaped up the history of Mexican recipes.