5 Mistakes Everyone Makes in the Kitchen

The kitchen is important as bedrock of most homes; not only is it the place where food is prepared but it’s also increasingly used as a social hub as well. Important decisions are said to be made round the kitchen table and as children it is a place where we learn about safety, responsibility and creativity.

Yet despite the fact that we all spend at least some time in a kitchen everyday (unless we have servants that do all the cooking of course – but I think that only applies to the Royal family), there are a few strange and slightly illogical practices that we all seem to do in the kitchen.

I am not talking about your actual kitchen design here, although there are pages and pages of content on this online, and if you don’t know what a ‘kitchen work triangle’ is then you might want to read some.

Rather, I am talking about mistakes that we all seem to make as we go about our daily kitchen business. We will leave the ergonomics and colour schemes of your kitchen for another day as we delve a little deeper into human behaviour. I don’t know how these practices became so widely ingrained, but they did, and here they are: 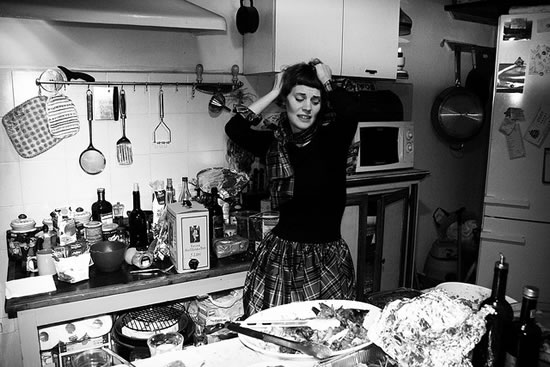 You’re Not Using Your Knives Right

If you ever watch any of the million and one cooking shows that fill up our airwaves on a daily basis, you are likely to have witnessed some serious knife skills on display. While this level of skill is not something that can be learned in a few minutes, those minutes are more than enough time to correct some bad habits.

The first thing to do is make sure your blades are sharp. Slicing with blades that are too dull is a common practice and, although you might think sharp knives are more dangerous, dull blades are actually the cause of a large majority of domestic kitchen accidents through people trying to compensate for a lack of cutting ability by applying too much pressure.

Your best bet is to get yourself sharpening steel. A good tip here to make sure you are getting your angles right is to run a permanent marker down the edge of the blade before you sharpen it. By making sure you rub off all the ink you will know that you have kept your angle consistent.

With regards to actual chopping, video is much better than words. This one will show all of the professional chopping techniques you need!

You’re Wasting Too Much Food

This one is pretty simple. The inclusion of ‘best before dates’ on food packaging have made people are increasingly paranoid of stuff going bad. This has meant that all of us are probably guilty of throwing out a lot of edible food.

Sites like Still Tasty are trying to change people’s perceptions by listing the real shelf life of certain kinds of food as well as those that shouldn’t be put in the fridge (putting tomatoes, potatoes and onions in the fridge actually speeds up their decay).

The general rule is that if it doesn’t have mould on it, doesn’t smell weird and doesn’t taste funny then it is probably not going to do you any harm. People survived just fine a hundred years ago when ‘best before dates’ didn’t exist, you know!

You’re Not Prepping Your Food Right

This is quite often linked to a lack of proper knife skills, but is also a symptom of inefficient organisation. Most people tend to wash, peel and then chop one vegetable at a time, whereas getting a production line-like technique where you do all the peeling at once and then all the chopping is actually much quicker.

There are a whole host of neat tricks you can learn that make food preparation much less of a dull and repetitive task.

The natural impatience that most of us feel in the kitchen often leads us to rush heating things up, causing the quality of our food to suffer. This by far the most common kitchen mistake in the world!

The problem here is that cooking food in a high temperature gives it the appearance that it is cooked but it may not be on the inside. There are actually very few foods in the world that require such an intensely hot cooking process and they basically revolve around the idea that you want them to be cooked more on the outside then the inside.

Slow down, relax and have as much fun preparing your meals as you do eating them – when simmered slowly or gently fried over a low heat, most foods taste all the better for it!

You’re Not Using Your Pots and Pans Right

A lot of people underestimate the importance of using the right pots and pans. This is important because the texture and size of your pan is going to have a pretty large effect on the cooking process.

If you are trying to cook something on a high heat in a pot that is meant for boiling water, you are going to be trapping a lot of moisture and turning the consistency of your dish mushy. Similarly, if you have cramped a load of pasta into a small pan, they are going to release way too much starch and become gummy in texture.

Invest in a different pan for every different need – a milk pan to heat milk, a saucepan for sauce, a frying pan to fry things and a wok to fry really big things!

Has anyone else got any useful kitchen tips?

Estelle Page is an interior designer and good-food addict who writes for KDCUK, German kitchen designers. Her top kitchen tip is to invest in quality knives – once you’ve used a £100 Japanese Global knife you’ll never want to use a £10 Ikea one again!
Image Source