India is one of the world’s leading coffee producers, certainly not the biggest but well established in the top 10, and a producer of delicious and in some cases complex flavoured coffee.

Coffee growing and production is focused in the southern Indian states of Karnataka, Kerala and Tamil Nadu and is typically shade grown. Following the harvesting of the beans either dry or wet processing methods are used in India. India’s coffee plantations grow Arabica and Robusta beans, which are grown across different climates to produce the different varieties which are then exported across the world. 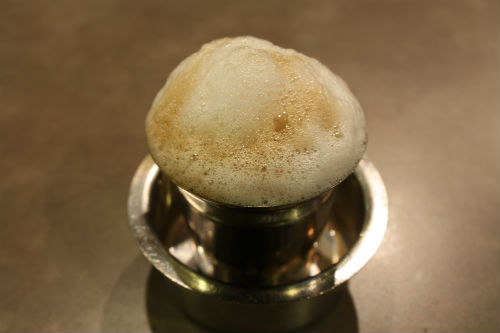 This south western area of India also produces Indian monsooned coffee, which is named after the processing method which gives the beans their distinctive flavour – developing a smoky and earthy flavour. These beans are more intense in flavour following the monsooned coffee process and have a reduced acidity. The beans are also noticeably yellowed. The western shore is deliberately chosen for its exposure to the south western monsoon winds between June and September.

Although it has obvious connections to the monsoon rain, monsooned coffee is actually a dry processed coffee. Once the coffee beans (Arabica or Robusta) have been dry processed they are exposed to the Indian monsoon conditions, rain and wind, for around three to four months in specially designed warehouses (curing factories). The process is lengthy and requires attention and care to ensure the beans are regularly turned and raked as they swell under exposure to the wet winds of the monsoon season. Monsoon Malabar is the well-known example of single origin and monsooned coffee beans produced in India, popular across the world and a “flagship” bean for the India coffee industry. In the UK, monsooned coffee is a popular choice of bean for those looking for a smoky and intense flavour.

Coffee preparation styles differ greatly between the UK and India, in the UK popular coffee preparation methods include stove top coffee makers, cafeterias and filters. The filter preparation method has similarities to the traditional style of producing South Indian Coffee. The filter style of preparation allows hot water to pass through the ground coffee via a gravitational process, in the UK this method is often used to prepare a jug of coffee whereas the traditional South Indian coffee method is used to produce individual cups of coffee. The addition of chicory to the coffee grounds produces a strong coffee by the Indian method which is then drunk as a sweet and milky coffee. This looks like a fantastic way to produce a cup of coffee and one I would love to try, it would be great to finish a meal with and probably better tasting than some of the filter coffee I have been served after some meals!

The smooth taste of Indian coffee makes it an excellent coffee to use as an accompaniment to dessert, particularly with a rich dessert such as a mango and coconut crème caramel or tiramisu cake. Like all ground coffee, Indian coffee needs to be stored correctly to ensure that retains its flavour and freshness so you can enjoy the best quality cup of coffee! When storing coffee you want to avoid four key elements – air, moisture, heat and light. The best method is an air-tight container kept in a dark cupboard; avoid the temptation to keep coffee in the fridge to preserve its freshness. Once the Indian coffee beans have been roasted they begin to lose their freshness, and once ground this process is sped up and it is best to consume ground coffee with 2-3 weeks of purchase. If you are buying online then the roasters will often include a date of when the coffee was roasted which can help you keep an eye on dates and ensure that you enjoy the best cup of coffee.

Ben blogs for York Coffee Emporium who sell luxury coffee beans online in the UK, their stock includes the ever popular Indian coffee beans. The beans are sold to cafes and homes across the country, and coffee beans are used to produce high quality espressos as well as brewed coffees.